Edenvale has been growing every year and has added new runways, taxiways and ramps. Edenvale Aerodrome has multiple runways which may be in use simultaneously… view this page to see the circuit patterns and airfield services.

Special procedures and precautions must be observed whenever runway 31 and 35 or runway 13 and 17 are in use simultaneously. In general terms, the basic circuit will be for 13/31 with pilots modifying their downwind, base and final legs slightly in order to use 17/35. 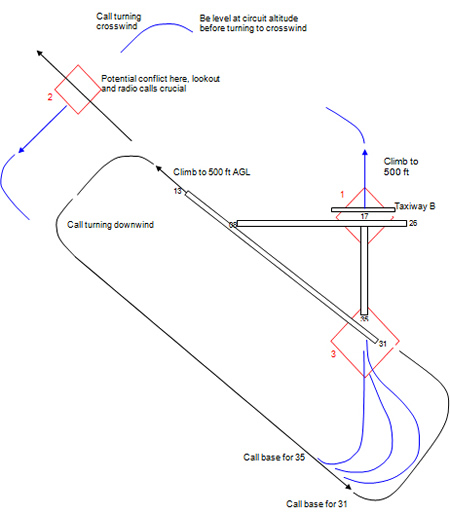 A pilot intending to land on 35 will join the circuit for 31 on arrival. The pilot may have a conflict with traffic ahead of him that is landing on 31. The several blue flight paths in the diagram describe the possible paths the pilot on 35 may have to follow to maintain separation with the aircraft ahead of him/her in the circuit. The pilot landing on 35 normally must maintain his/her sequence for landing and not use this “cutting the corner” flight path to land ahead of traffic ahead. 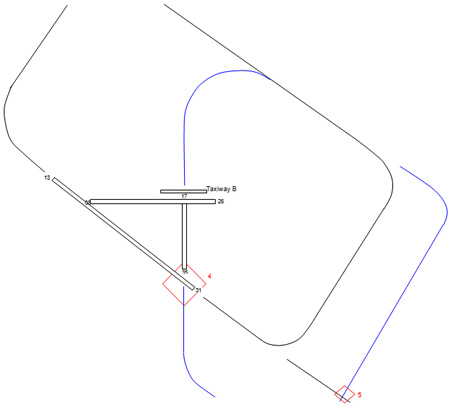 GPS APPROACH- NOT FOR NAVIGATIONAL PURPOSES

When 31 and 35 are in use there are three locations where there is potential for conflict because of the different orientation of the runways. These locations are depicted on the diagram and the pilot actions required to mitigate risk are as follows: Location 1: Intersection rwy 26/08 with the extended centreline on the departure end of 35. Pilots taxiing and taking off or landing will have to visually ensure no conflict. Pilots hold short on rwy 08/26 at least 60 m (200 ft) from the edge of 17/35. Yellow hold markings are painted on the pavement. Location 2: Intersection of the crosswind leg of the re-joining aircraft with the flight path of an aircraft climbing straight ahead on departure from 31. The aircraft joining the circuit (ie the one coming off 35) must yield to the aircraft already in the circuit for 31. Location 3: Intersection of the flight paths of both aircraft on final approach to their respective runways. An aircraft in the downwind position must not alter its sequence for landing by virtue of cutting off an aircraft ahead of it during the turn to final. The blue flight paths show the variety of options available to the pilot going for 35 that will keep him behind any 31 traffic that might be ahead. When 13 and 17 are in use, there are another two locations where conflict may occur: Location 4: Before taking off on 17, pilots must visually determine that no conflict exists with traffic on the button of 13 awaiting take off or traffic on final for 13, regardless of intentions to stop. Similarly, pilots taking off on 13 must determine there is no traffic awaiting take off or on approach for 17. Location 5: Pilots departing 17 and joining the crosswind for 13 and pilots departing 13 straight ahead must ensure no conflict with traffic from the other runway.